Spotting a Wolf in Sheep's Clothing. 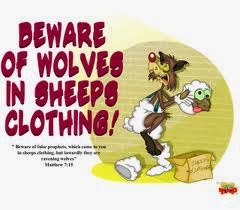 We all need spiritual discernment to tell the counterfeit from the genuine when it comes to a wolf in sheep's clothing.  The counterfeit is so laced with God, Jesus and the Holy Spirit to give it acceptability of truth that the only way to tell they are wolves is to have a revelations of Who God is through His revealer Jesus and through the One who doesn't speak of Himself but speaks of Jesus the Holy Spirit.

Characteristics of Wolves in Sheep's Clothing .

They abuse and misuse the Bible for a means to their own end.
They maintain that God speaks to them directly and frequently.
They maintain that they are the conduit from God to relay spiritual truths to the spiritual hard of hearing...the pew warmer.
They preach denominated man-made doctrines of rule keeping rather than the Gospel of Grace.
They say they prophesy what God gives them yet, it fails to come to pass.
They manipulatively fleece the flock of their money and lavishly spend it on themselves.
They preach that God will bless you for giving money to their ministry with health and wealth.
They preach guilt, judgement and condemnation to instill fear in people and keep them under religious control.
They are more sin conscious than they are God conscious.
They are more hellbent on scaring the hell out of people into the kingdom than they are God sent to love people as the persuader to Salvation because of the goodness of God.
They suffer more from power hunger than spiritual hunger.
They are more concerned about their denominated doctrine than they are loving and caring for people.
They talk a lot about themselves and what they have accomplished rather than Jesus and what He has accomplished.
They frequently reference the size of the audience, the miracles, and the number of salvations, to validate God’s anointing on them and their ministry.

But even in those days there were false prophets, just as there will be false teachers among you today. They will be men who will subtly introduce dangerous heresies. They will thereby deny the Lord who redeemed them, and it will not be long before they bring on themselves their own downfall. Many will follow their pernicious teaching and thereby bring discredit on the way of truth. In their lust to make converts these men will try to exploit you too with their bogus arguments (2 Peter 2:1-3a).

They may be dressed in Sheep's clothing but underneath they are ravishing wolves!