The Bible Speaks Of Him Who Is Truth...But It Itself Is Not All Truth.

FOR YOURSELF!
Not just to know about Him through what someone else tells you what they think the Bible says about Him.

There is much more about about God we need to know, but the religious deception we are in has caused us to be dull of hearing or understanding spiritual truths contained in the scripture. We have been believers long enough to be teachers yourselves, yet we still need someone to spoon feed us and rehash the basics about God again...we still need pablum...when we should have been on solid food long before now. Pablum is for new babes in Christ or old babes who are spiritually immature and are inexperienced in the ways of God. Solid food is for the spiritually mature, those who hear, know and follow the voice of Father God rather than the manipulative voice of seminarian denominated deceived men. See Heb. 5:11-14.

It is a sad reflection on Christendom when there are so many believers who have been “in the way” for so many years and have not yet matured enough to move off spiritual pablum, that as of yet their spiritual digestive track has trouble digesting. As long as they remain dependent on the seminarian denominated teachers they will remain on spiritual pablum because the teachers themselves have not eaten or digested the spiritual meat that the Holy Spirit desires to feed believers with.

I wonder how different the epistle of Hebrews and the other epistles would read if they had not been limited by the immaturity of the believers. How much more would have been written had they not been spiritual babies feeding on spiritual pablum.

The teaching from Hebrews rarely, if ever, gets beyond the breast feeding of the foundational teachings of doctrine recorded in chapter six of the book.

Therefore leaving the principles of the doctrine of Christ, let us go on unto perfection; not laying again the foundation of repentance from dead works, and of faith toward God, Of the doctrine of baptisms, and of laying on of hands, and of resurrection of the dead, and of eternal judgement. And this will we do, if God permit. (Heb. 6:1-3)


Denominational preaching and teaching keeps returning to breast feeding on the elementary principles instead of moving on to perfection by being weaned from the milk of the foundational breast to taste of the heavenly gift and become more spiritually mature in Christ. Believers have to realize that the religious preachers and teachers CANNOT teach mature revelation of God...only God's appointed Teacher can do that...the Spirit of Truth...for He only knows the full heart and mind of God.

Full Gospel denominations consider the book of 1st Cor. to be the real meat of the Bible. It is this idea that caused the formation of the many pentecostal denominations that are in existence today. But the food here is also only baby food, written to big carnal believers who have not been weened from the breast. For in 1 Cor. 3:1-2 we read; And I, brethren, was not able to speak to you as to spiritual, but as to fleshly -- as to babes in Christ; with milk I fed you, and not with meat, for ye were not yet able, but not even yet are ye now able.

Because of the record from the written word referred to above, isn't it presumptuous to establish definitive man-made denominated doctrines that are considered to be complete and without error when that doctrine was built on partial understanding and truth that is limited by the spiritual maturity and the denominated pigheadedness of the reader who formulated the doctrine?

The bible speaks of Him who is Truth...but it itself is not all truth. 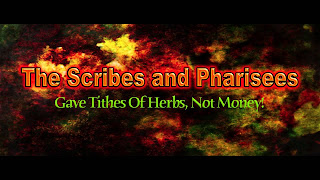