Religion...the Road of the "Walking Dead|" 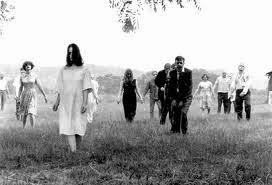 Christ is the Head of His ekklesia...“the called out ones”...the Community of the Redeemed. What ever is orchestrated, planned and implemented by man's ingenuity is not relevant to the Community of the Redeemed as Christ representatives in the earth. Religion assembles people together by denominations, doctrines, bible interpretations, special interests or around charismatic leaders that maintains an appearance of spiritual wisdom, this results in division of God's family. Believers are to assemble under the Headship of Christ, with Christ...not the headship of religion without Christ or Christ in subjection to religious hierarchy.

The complexity of mixing law and grace by the religious world, veils the simplicity of Christ and His Gospel of Grace and complicates the believer's life. The programs and and promotional methods of the religious system have led the institutionalized denominational assembling to a state of religious busyness, doctrinal shallowness and spiritual bankruptcy. Being religiously busy is not an indicator of spiritual aliveness.

The reason for the onslaught of religious activity is the absence of Jesus as its head therefore, it has no link to Divine supply or enablement. Regardless of outer apparent religious spiritual disciplines and pious activity, it does not, nor cannot result in inner transformation of the heart.

Gaining obedience by holding people accountable to religious rules and religious performance, by fear-mongering or as a means of opening the windows of heaven to get under the rain of God's blessings is not heart transformation business. Why so many believers want to walk around wrapped in religious grave clothes, is because they have refused to let the cross do its complete work in them, they want to hang on to the old way of the law by mixing it with the new way of grace. Only when the finished work of the cross is allowed to do its work can we break from dependence on our works of self-righteousness, will there be a full realization of the fulness of the freedom of grace to do its work in us. Only when we are united under the true Head will we realize the unity that Jesus prayed for His people.

Only the freedom of the Spirit of the life of Christ can raise us from the dead works of self-righteousness. Only the power of Grace can empower us to subdue the sins of the flesh.

Religion embraces its own, as is evidenced by the name-tagged different denominations they are known by. Religion is not an affront to the world system because it is of the world system.

Religion is a fleshly counterfeit for spiritual life. God has one plan for the flesh and its religious system, and that is death...so why not stop living the life of the “walking dead” and instead follow Christ down the pathway of Grace and His righteousness...instead of following religion down the pathway of the Law and self-righteousness that is crowded with the "walking dead."