The Drawing Power to Win People to Gospel is not the Fear-Mongering of HELL. 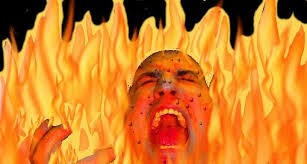 The way the gospel is presented by the religionists, one would think that God delights in fear-mongering tactics to woo people to Himself. God is love, love never thinks that way therefore, God does not think that way. The scripture declares that it is “the kindness of God that leads people to repentance and away from any hell that there may be.” The fear-mongering fear-monger’s vivid mongering of hell was never meant to be the drawing power that drew people to God.

To listen to the religionists, one would think that God created people to save their souls from hell...He didn't! It is as if the Godhead sat around talking...”let us make man in my image, but sinners so Jesus can go and save them from hell after the Holy Spirit convicts them of the sinning sinners I created them to be.” Absurd...VERY!

One would think that God and Satan are going tit for tat for the souls of men, and according to religion Satan wins in the end because the vast majority of God's creation is spending eternity in a hellish lake of fire that was created for him. Absurd...VERY!

God didn’t create people in His own image so He could save them from hell. He created people to have a relationships with Him and with one another.

Because scripture states that “vengeance is mind saith the Lord”, does not mean that God is a God of vengeance to people, God does not get pleasure in getting revenge on people by sending them to hell fire...GOD DELIGHTS IN FORGIVENESS!