Did Jesus Finish it or Not? 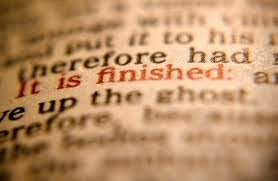 When we clearly understand the purpose of God for mankind is to “draw all men unto Himself”, we will clearly see that the purpose for Jesus going to the cross was to raise the "walking dead" to life. And we will begin to see why the FINISHED work of Christ had to deal with the sin problem once and for all as taught in the Post Cross Testament.

But now He has appeared once and for all, at the end of the ages to do away with sin by the sacrifice of Himself (Heb. 9:26)

For Christ died for sins once and for all, the righteous for the unrighteous, to bring you to God. He was put to death in the body but made alive by the Spirit (1 Pet. 3:18).

The totality of Christ's sacrifice on the cross has been a contention within religion since His resurrection. The religionist has taken the law of Moses, with its sacrificial system that God gave to Israel along with the list of do's and don'ts and mixed it with the Grace gospel that Jesus gave to Paul for all people, and presenting it as the gospel, but it is not the gospel as Paul so plainly tells us in Galatians.

Even though these sacrifices were God-sanctioned, they were not ordained to give people a relationship with Him. Instead the law showed mankind the impossibility of people keeping it and the sacrificial system was merely a picture of Christ and His finished work on behalf of the Human race.

The Law is only a shadow of the good things to come...not the realities themselves. For this reason it can never, by the same sacrifices repeated endlessly year after year, make perfect those who draw near to worship (Heb. 10:1).

God in His graciousness gave the sacrificial system to Israel as a means for them to experience relief from the guilt they experienced by not being able to obey the do's and don'ts of the law in their striving. Those sacrificial offerings did “atone”...”cover” the people's sins but it could not take away their sins, “because it is impossible for the blood of bulls and goats to take away sins” (Hebrews 10:4). Man under the law could experience the blessing of forgiveness by the sacrificial system, but it provided no final solution.

Then in God's timing, Jesus came into the earth realm...the perfect, sinless God-Man...”Look the Lamb of God who TAKES AWAY THE SIN OF THE WORLD!” (Jn. 1:9). Praise God...from that point on, the finished work of Christ in sacrificing Himself is presented as the answer to man's inability to keep the law, and is totally different than the old sacrificial system.

And by [God's] will, we have been made holy through the sacrifice of the body of Jesus Christ once and for all. Day after day every priest stands and performs his religious duties; again and again he offers the same sacrifices, which can never take away sins. But when this priest had offered for all time one sacrifice for sins, He sat down at the right hand of God (Heb. 10:10-12).

In contrast to the former way of doing the do's of the priest...standing and making continual sacrifices...Christ is said to have sat down. Why? Because He FINISHED the sacrifices of the former and by His sacrificing Himself has settled the sin issue...”Jesus did it all , all to Him I owe.”

Notice what it doesn't say here...it doesn't say that we act perfect in our action...we all know we don't; this perfection is referring to our IDENTITY in Christ. The scriptures declare that in spite of our short comings and failures, through Jesus Christ we have been made totally acceptable to our holy God.

People of God, we need to settle the issue of the completeness of the sacrifice of Christ on the cross and His resurrection in our own minds, or we will never enter into the freedom to discover the reality of the resurrection...the raising of the "walking dead" to life in Christ as His Community of the Redeemed bringing His Kingdom to earth. 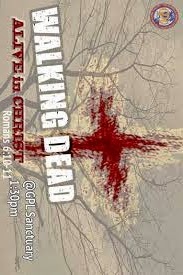