The Bible is Misunderstood because of Minunderstanding People. 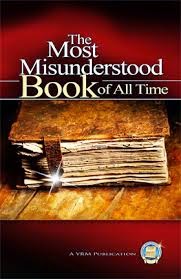 Bible inerrancy, Bible authenticity, Bible infallibility, when looked at in light of the facts that disprove such phrases and debated, the debate becomes lost in endless religious tradition of interpretation and subtle questions of translation. The claims of religious believers that the Bible is what the above states puts the religionists in the position of not just claiming that the original manuscripts were free of error, but also the translation from the errant copies by fallible men who produced the Bible is the end result of error-free copying and translating.

Such a held position is faulty and a simple reference to the Bible itself is all that is needed to disprove such a claim.

Is it possible for both of these statements to be true? There is either a factual error or a translation error...either way, there is an error. Therefore, the infallibility and inerrancy of the Bible, as purported by religionists, is falsified. I am aware of the comeback of the religionist regarding the defense they put forward...they look up the different meanings of the word in the Hebrew or Greek and choose the one that can break the contradiction. Their reasoning may go like this...the word "seen" or the word "face" means one thing in the Genesis verse and something else in the John verse.

The logical problem in such reasoning is that it amounts to saying that the translator should have chosen a different word to use in one of the two scriptures in order to avoid the resulting logical contradiction that now appears in English...which is saying, the translator made an error. If no translation error occurred, then an error of fact exists in at least one of the two scriptures.

The contextual “context” is irrelevant in cases like this where such declarative statements are stated such as; “no one has seen God” and “I have seen God.” If one is prepared to allow for the possibility of translator or transcriber errors, then the claim of Biblical inerrancy is completely undermined since no originals exist to serve as a benchmark against which to identify the errors.

Daniel Wallace is a noted Greek scholar and professor of New Testament at Dallas Theological Seminary. In his paper entitled “Why So Many Versions?” Wallace makes the following statement -“...we must remember that the King James Bible of today is not the King James of 1611. It has undergone three revisions, incorporating more than 100,000 changes!”

"All of the above changes retained the original name. However, in recent times, in additions to changes being made in the text, even the very name of the Bible has changed. Few people realize that all these Bible Versions listed below are nothing more than revisions of the original 1611 King James Version;"

Left with only error-prone copies of the originals translated by error-prone men, tutored by agenda driven religious erroring superiors, the boat of inerrancy and infallibility is full of holes and the ship sinks because of the Bible itself.

The Bible is the written word that points to Jesus the Word, is it not time to stop idolizing the Bible and allow it to be the tool the Spirit of Truth uses to honor and glorify Jesus, the Living Word of God?

The Bible is the greatest book in existence...but it is not to be used to discredit Jesus or usurp Him as "The Living Word" of God by false claims of infallibility, inerrancy and the only authorized version. Because King James authorized it does not mean God did.