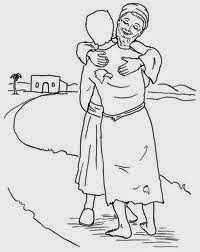 The religious gospel with its law keeping, its rule and ritual keeping is man's search for God.

The Grace gospel with its trust in God, with its total dependence on God is God's search for man.

While we were yet in weakness [powerless to help ourselves], at the fitting time Christ died for (in behalf of) the ungodly....But God shows and clearly proves His [own] love for us by the fact that while we were still sinners, Christ (the Messiah, the Anointed One) died for us...For if while we were enemies we were reconciled to God through the death of His Son....(Romans 5:6-10).

In reading the story of the cross, what do you find that Christ didn't do that religion asks of men to do? Maybe you will get it from this statement; “NOBODY asked Jesus to FORGIVE them of their SIN! Instead Jesus said, “Father forgive them, for they know not what they are doing” (Luke 23:34). Jesus did not give an alter call to the men He chose as disciples before He called them to follow Him, He said; “follow me and I will make you fishers of men.” This action by the men who became His disciples is a foreshadow of how all people are to come to Christ because His finished work on the cross is finished. Their repenting is to turn from following the ways of man and turn to following Him...forsaking all other means to get to Him and follow Him only.

It was solely Jesus' action on His own initiative that brought about the forgiveness of man! Man did NOTHING nor can do ANYTHING to bring about his salvation, JESUS did it ALL, and ALL to Him I owe, that fact is the reason I have a relationship with the divine.

What does the story about the “prodigal son” (I think it is a story that reflects the heart of our LOVING FATHER more than about the wayward son) teach us about this fact as recorded by Luke 15:11-32? The account gives a perfect picture of Father God's attitude toward lost people this side of the cross. The youngest son had taken his inheritance and blew it wastefully, bringing shame to His father and family. Without a penny to call his own...he is down and out...In order to stay alive he accepts a job that is on the lowest scale possible for a Jew, feeding the pigs. But what is his father's attitude? Did he write the boy off, did he demand a return of the money, did he demand the young man to repent,? No. The father didin't looking down the road with a big stick in hand to beat upon the lad for choosing the wrong path to make him pay for what he had done. You can tell the father's attitude by his response when he saw his sinner son afar off.

But while he was a long way off, his father saw him and was filled with compassion for him; he ran to his son, threw his arms around him and kissed him (Luke 15:20).

The father then throws a big come home party that had nothing to do with demanding the young man repent of his waywardness. 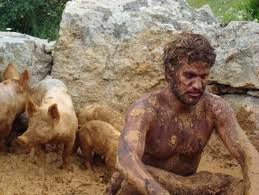 Now get the picture here. When the boy was squandering away his inheritance, when the boy was in the hog slop of the pig pen, what stood in the way of his returning to his father? Was the father waiting for him to repent before his coming home? No, Was there a barrier to His coming home on the father's part? If repentance was necessary the father would have waited until he repented before standing daily to gaze down the road in hopes of seeing his boy. The only thing that kept the boy from his father was his own decision to stay in the hog slop and not make a decision to go home.

Today God is calling people that He has forgiven to come home, just like the father longed for his prodigal wayward boy to do. This is a result of Of Jesus' finished work on the cross. Jesus did ALL that was necessary to remove the disease of sin, when a sinner turns from his selfish ways and turns to God he falls into the arms of a loving Father he is accepted as he is...not for saying some “sinner's prayer”. He comes home to life and living because hr is restored to life and living.