Why did Jesus Come to earth? 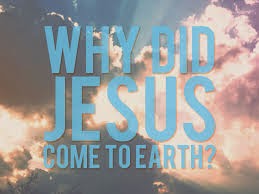 For 50 of my 65 years of living on this earth I have been attending religious meetings and listening to the Gospel...or so I thought. And it went something like this, “man is a sinner destined to suffer in the pangs of hell for eternity. Jesus came to die on the cross so that man could be rescued from hell and fitted for heaven. Somehow this religious mentality was based on John 3:16; “For God so loved the world that He gave His only Son that whosoever believes in Him should not perish but have ever lasting life.”

The Gospel was presented by fear-mongering mongrels threatening people to an eternity in hell if they did not repent by saying the “sinner's prayer”, then attending some denominational religious building on Sundays and abiding by the religious rules and rituals.

Religion still functions today by espousing a partial gospel in that man is in need of forgiveness through the cross which eradicates our sin and guilt. But it does not give us power to live above sin and live the Christ life in the here and now.

Man's problem runs much deeper than needing a Savior to save him from hell so he can go to heaven. The root of man's problem is he is dead! God sees mankind as dead and in need of life. The death of Christ on the cross did not raise man from the dead. If Jesus died on the cross and remained in the grave there would be no remission of sin and the world would be full of the “living dead.”

The ultimate word that describes “resurrection” is “restoration”...the resurrection restores life to the “living dead” and makes them alive unto God! That is how we are to live in this world, “alive unto God through Christ living in us and through us by His Spirit. “but God. Being rich in mercy, because of His great love with which He loved us, even when we were dead in our transgressions, made us alive together with Christ (by grace you have been saves) (Eph. 2:4-5).

As a side note...for you who have responded to one of my posts regarding God loves the sinner by saying, “I used to believe that God loved the sinner but hated the sin, but I no longer believe such nonsenses, God hates sinners.” Maybe you should take the above verse to heart and apply it to your thinking.

The religious gospel heralders have associates the Holy spirit with the giving of power to preach, to understand the bible, power to teach, power to serve, while neglecting the single most important aspect of having the Holy Spirit... THROUGH HIM WE HAVE RECEIVED THE VERY LIFE OF CHRIST, THUS THE VERY LIFE OF GOD HIMSELF!

By only associating the Spirit's ministry with power, the emphasis is “meism”... “God give me”, God help me”, God empower me”. And we take comfort in the fact that the Spirit helps us but, it is still “us” doing the doings and “us”doing the doings is not God way! Christ did not come to “help” me to do doings for God; He came to live in me, live His life through me and do His work through me! Christ is our enabler because He lives in us to do His work through us. See Gal. 2:20.

And the thing is...it will kill them...because for a person to live the life of a believer is impossible...ONLY CHRIST CAN LIVE IT!

And that my friend is why Christ came!

THAT IS THE GOOD NEWS GOSPEL OF GRACE!