Are You Christocentric or Churchocentric? Part 1 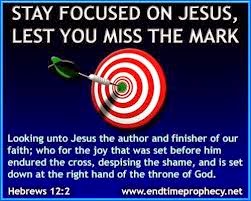 Let's look at what I mean by Churchocentric. Well we are familiar with the term ego-centric meaning that one is concerned with ones-self, they are people who are self-centered and concerned about their own desires and needs. Churchocentric is where the segregated denominations have formed what they call "Church"  and are concerned with their own denominational culture all with their own different beliefs and agendas that benefit their particular brand of theology. They claim they are all based on the Bible and they have the correct theology and doctrines.

I am not referring to "Church" as the Community of the Redeemed, rather I am referring to the acceptance as to what the word means culturally. Being Churchocentric is when we focus on a denominational name tagged building and what takes place in that building.

A building made with hands and the claim that such a place is where to go to meet with God.
A hierarchy structure of control.
A man at the controls called the pastor who is the spiritual pipe line between the people and God, is appointed by man, seminaried by man, ordained by man, deemed fit to be a pastor by man, paid by man, accountable to man and enforces man-made denominational doctrine.
A board to supplement the pastor.
Is governed by man-made bylaws and constitutions.
Denominational disciplied rather than Jesus discipled.
New converts time.
Children's time.
Youth time.
Men's time.
Women's time.
Sunday-go-event-driven-meeting time.
What takes place during the event-driven-meeting is accepted as Church life.
A Worship time.
Offering and Tithe gathering time.
A prayer time.
Choir time.
Preaching time.
Alter call time.

All this is centered around a building called Church thus, Churchocentric. Culturally, it is a people who align themselves to a building as a gathering place and call the building Church. They are centric in that they stay within the four walls of the building, while proposing to be outreach oriented. They are consumed with their own "of like faith" family, and have little impact on the community of humanity they are to influence towards Christ. These segregated entities called churches, in some way or another have similar styles based on the above church patterns.

I understand Churchocentric as being self absorbed while proposing to be community minded and outreach oriented. Why is Church is accepted as a divided, segregrated, denominated building where people of like faith segregate according to their like belief confined to their particular "walled building" bound by orthodoxy, by-laws, constitutions and ordinances, when it is nothing like the early community of believers.

However, the community of the redeemed is to be CHRISTOCENTRIC not CHURCHOCENTRIC.

Jesus was not a member of any segregated denominated group. He Himself, brought the very presence of God, to the people He encountered in every day living. He did not restrict the limitations of His Love and Mercy and Forgiveness by going to a building where people agreed with His way of living. In fact He went and mingled with the down-and-outers of society, the tax collectors, the prostitutes, the sick and suffering, His love and grace was toward saint and sinner alike. The community of the redeemed  is not about meism, it was formed by God to be relevant to all of society by living as the Community of the Redeemed in the Community of Humanity impacting it with kingdom living.