Does God have a Dualistic Nature? 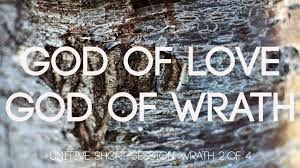 Because of misunderstanding between and misapplication of the pre-cross and post-cross covenants, many people have a wrong idea concerning the Bible, thus it is misused and abused in religious "churches" all across the world. Also, people's view of God is warped and perverted. God is viewed as a two natured being, having a nature of wrath evidenced by His revenge-fulness, his judgement and killing of people, including innocent women and children, in the Old Covenant. He is viewed has a God of mercy, compassion, grace and love in the New Covenant. The idea that God is love...BUT...He is also a God of wrath is far from the truth of who God is. There is only one God and He is the "same yesterday, today and forever." "In Him there is no shadow of turning." "I am God and I change not." "God is not man, therefore he does not lie." God never "was" or never "will be" different from time to eternity. God is today what He is in the past, and He is in the future what He is today! God has no past or future...because He IS!

People who derived at God as being dualistic in nature from the bible are deceived by the religious teaching they have received, failing to listen to the voice of the Spirit, and they fail to understand both the Old and New Covenants. The thundering of the fear-mongering bible-thumpers fires up people's misunderstanding and misapplication of the bible and God.

There is only one God, and his character is exactly the same from Genesis to Revelation. People who derive that erroneous conclusion from their Bibles are either reading selectively, or they are failing to understand what they are reading. The God you see revealed and dealing with man in the Old Testament is a God full of grace, compassion, forgiveness, and patience. He bore with Israel’s persistent sins and unfaithfulness for many generations. He announced his grief over their cold hearts and  evil behavior. He plead with them through the prophets. He warned them of the judgment that must come because the old covenant (that they verbally signed off on) demanded it. He restrained His judgment time after time, but ultimately He had to deal with His people according to the "if" covenant that He also signed off on. The judgment had to fall. The God of the Old Testament is no different from the God of the New Testament. No, God moved according to the different covenants.

While God has not changed...His nature and character being eternal and unchangeable...His way of dealing with mankind have changed. Previously, Israel was under Law, and the Gentiles were left to their own devices (the Law was only meant for the Jews, it never ever applied to Gentiles). Of all the changes, none is more striking than the shift between the pre- and post cross covenants. Remember, the Old Covenant between God and Israel was conditional and bilateral. It was dependent upon the people’s faithfulness and obedience, as Jeremiah reminded them: This is the word that came to Jeremiah from the LORD: “Listen to the terms of this covenant and tell them to the people of Judah and to those who live in Jerusalem. Tell them that this is what the LORD, the God of Israel, says: ‘ Cursed is the man who does not obey the terms of this covenant the terms I commanded your ancestors when I brought them out of Egypt, out of the iron - smelting furnace.’ I said, ‘Obey me and do everything I command you, and you will be my people, and I will be your God’ ” (Jeremiah 11:1- 4).

Israel was unable to keep their side of the bargain, so the prophet announced the covenant’s end: “From the time I brought your ancestors up from Egypt until today, I warned them again and again, saying, ‘Obey me.’ But they did not listen or pay attention ;instead, they followed the stubbornness of their evil hearts. So I brought on them all the curses of the covenant I had commanded them to follow but that they did not keep” (verses 7- 8). Israel failed. The covenant was broken. The relationship was broken. Now comes the good news: The Lord promises the coming of a New Covenant in which he declares, “I will be their God, and they will be my people.” What is most striking and glorious about this promise is what isn’t there: There is no “if”! If our relationship with God depended upon our doing, we would have fail as miserably as Israel did. None of us is religious enough, good enough, faithful enough, or pure enough to to gain or maintain a relationship with the God.

The New Covenant is not about we can do, it is about what God has already done. What God said He would do He has done, why, because we could never attain on our own. It is not “if we obey Him fully and keep His covenant, then He will be our God and we will be His people.” He takes upon Himself the responsibility for our relationship . He will create and maintain our relationship with Him, based on His own faithfulness to His promise. That dear believer is the foundation of any sense of real security we can have. Our relationship does not depend on our faithfulness to Him, but on His faithfulness to us!

God's Grace is the power believers need to keep the commandment that enables us to be true in our relationship with Him. His commandment to LOVE!

God's nature is not dualistic, one of wrath and one of love...The bible does not declare that "God is wrath"...It  declares that "GOD IS LOVE".