Hearing the Spirit of Truth. 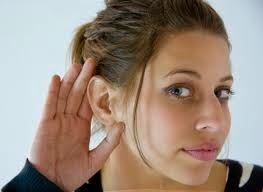 The words of the Spirit; “Whoever has ears, let them hear what the Spirit says to the churches.” (Rev. 2:29)

There are those who have ears to hear what the Spirit says...and those who don’t because religious fables have made them dull of hearing. The former listen to and are able to discern the Spirit of Truth when He speaks. The latter have tuned out the voice of the Spirit and comfortably disregard truth, while choosing to listen to and believe in the religious fables of denominationalism, man-made doctrines and tradition.

With regard to the religious deception of people caught in the religious trap of mixing grace and law of the religious system and calling it the gospel, just about every single institution...if not all...have succumbed to this deception. The sad case is that only a small percentage of religious deceptionized people will cast aside the fabled denominated teachings of their seminarian denominated professional so they can hear and recognize what the real truth of the gospel of grace is. While a much larger percentage of the religionists snub and despise grace truth by calling it hyper, greasy, sinning and false, not realizing they are despising Jesus Christ as well as His Gospel, as did the religious self-righteous people of His day.

The segregation of Christ Body into denominated name-tagged buildings that are called churches....is indeed a definitive religious issue of our times...even though religion does not think so. It is the issue that separates the Baptist from the Lutheran, and the Pentecostal Trinitarians from the Pentecostal Oneness, the Methodist from the Catholics...etc.. All religions wallow in religious inverted realities allowing them to believe religious fables as truth.

Denominational segregation is the major reason that the unity of Christ's Body... that Christ prayed to happen...is so disunited and divided into segregated denominated buildings.

"He that has ears to hear" listen to the voice of the Spirit.