Is Religion on the Way Out? 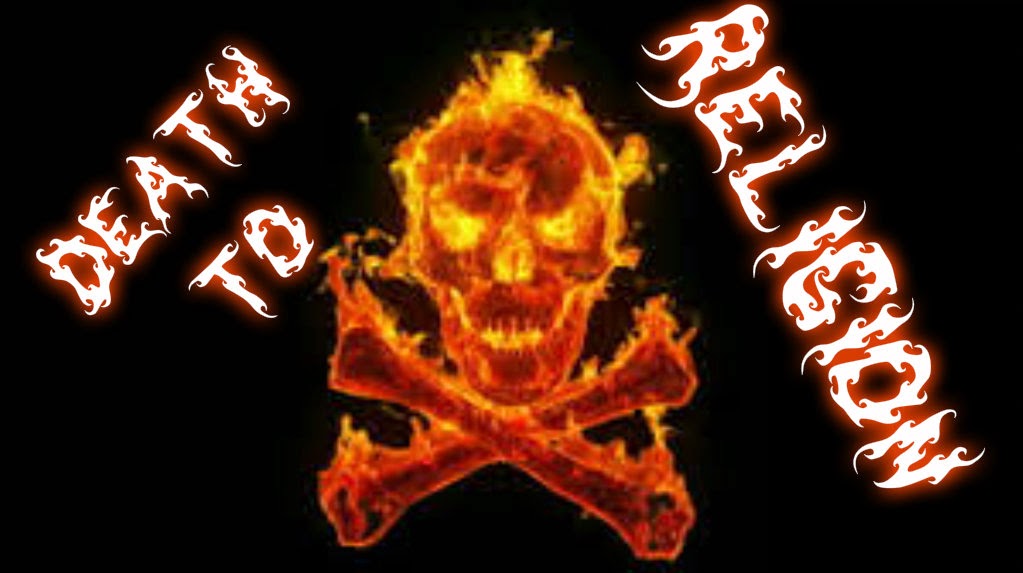 Is the decline in the number of people participating in the religious way of doing Church indicative of the sinking religious ship.

Surveys of such validate the dramatic increase in the number of people leaving denominational churches, and the number of religious institutions that now sit empty on Sundays is a stark reality that religion is losing its grip on its power over, its  manipulation of and its control of a large number of people that are thinking for themselves and debunking some of what they were taught by the denominated seminarian because of their seeing the fallacy of the fundamental beliefs of and the working of religion. Without a doubt, the "Christian Religion" (denominationalism) is being exposed for what it is...a great deterrent to the purpose and plan of God for the Community of the Redeemed in the Community of Humanity.

Now I realize that most people who claim to be believers believe that this decline is a NEGATIVE thing that is inspired by the devil himself. I mean, scores of people who have placed their trust in denominational fundamental doctrines are questioning these doctrines and giving up on them because they go against the character of God and scripture when they are looked at in the historical and contextual context. Without a doubt, people are becoming less dependent on religion. I for one, believe that such a decline in people's dependence and trust in religion is a POSITIVE thing.

That does not mean that religion will disappear any time soon, but the more people that leave its bondage, it will be less and less in control of people's lives as to what they believe and do.

Pessimism and skepticism regarding religious doctrines, denominated interpretations of the Bible, rules, regulations and practices are no longer accepted as truth because some denominated seminarian said so.

Before you club me on the head with your scripture stick so as to prove me wrong, let be be clear I am not bashing believers within the religious system, nor do I believe that the masses of people leaving religion's fold are leaving the Church of Jesus Christ, because, the segregated name-tagged denominations are not the Church that Jesus is building.

There is good reason I would like to attend the funeral of religion...It is not the Church that Jesus is building...It usurps the headship and authority of Jesus Christ...It puts man-made creeds, man-made doctrines, man-made rules and rituals above the teachings of Jesus Christ, and it has denied the finished work of Christ's accomplishment on the cross and His subsequent resurrection. Jesus knew that this would happen one day...“These people honor me with their lips, but THEIR HEARTS ARE FAR FROM ME.”

One of the primary man-made doctrines that has fueled denominational division and heresy is to equate the written word about God with the person of Jesus Christ Himself by claiming the Bible's infallibility by calling it the "Word of God", denying the words of Jesus Himself...and then to elevate the Bible on a pedestal of idolization that is rendered more honor than Jesus himself...His thoughts...actions...and deeds is blasphemy.

Another major departure is the failure of the religious system to recognize that God’s Old Testament covenant including the "Mosaic Law" with the nation of Israel was just that...a covenant with Israel. That covenant came to an end (especially for non-Jews) when Jesus arrived on the scene to enter into a new covenant with mankind. Religious fundamentalism and conservative evangelicalism cling so tightly to this old and obsolete system by mixing it with Grace because they fear that recognition of its fulfillment will undermine the authority of the religious hierarchical system that would spell the end of religion.

The Gospel is not condemnation, judgementalism or spending eternity in hell fire...it is the compassion, forgiveness and  love of Jesus and love for each other. Legalism, moral-ism, and the bondage to religious Old Testament law that Paul preached against in Galatians will come to an end. Yes, Jesus said that the law would not pass away until all is fulfilled and Jesus fulfilled it! Religion likes the Law Gospel and hopes that the law will exist forever because it is a weapon they can use to brow-beat their enemies...(but never themselves). The fact of the matter is that Jesus fulfilled the law on the cross and by His subsequent resurrection 2,000 years ago. The old covenant passed away, and the Old testament law passed away with it. We left the age of religious law keeping and entered the age of love and grace.

Another major departure from the plan of God by religion is the imprisonment of the Holy Spirit, God;s appointed Teacher. Religionists have bound him with religious ropes of religious doctrine and impeded the religiously deceived form hearing God's voice or seeing Him clearly through their religious spectacles of deception. Believers leaving the religious fold of conformity will release the Holy Spirit from His man-imposed imprisonment enabling men to embrace Him again, recognize His authority, and follow His lead as Head of His Body again...as was meant to be. The Comforter will truly teach us "ALL TRUTH" concerning Jesus.

Religion has taken denominational ignorance and embraced it as truth...leading men away from Jesus Christ in doing so. These inescapable facts will be a major factor in the Religion's destruction...by the leading of the Holy Spirit. God has marked Religion for death...and the dying process is already underway.

As the Holy Spirit pulls the focus of believers back to Jesus' love and teachings, the religious absolutism that has imprisoned God's people will disappear and the freedom that the Grace of Christ brings will be experienced by believers in their daily living.

The diet of religion is money...if there were a money food famine, the death of religion would...not be painless...but it would be quick!