Is there more to Jesus and His Gospel? 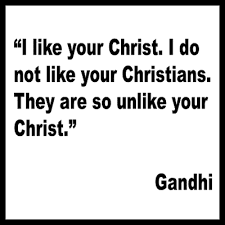 Is what we see and hear in Sunday-go-meetings all there is to Jesus and His Gospel, or is there more to the Gospel and Jesus than we have been led to believe?

Could it be that what is missing in relationship with God is actually that we are not focused on Jesus as the centrality of the Gospel...without our realizing it because we are so focused on religion as central to the Gospel? Aren’t people who claim to be believers suppose to follow Jesus and allow His life to be lived through them?

As the Community of the Redeemed should we not be focused on Jesus and bring His grace and love to the Community of Humanity to influence and transform people rather than being escape artists who are seeking to escape from the world by some secret rapture.

I wonder...should the Gospel be saved from “Christians” so that people can be “saved” from the gospel that is preached over denominated pulpits today that is at odds with Jesus and His teachings. Should we not remove our focus from religion’s man-made doctrines and creeds and focus on Jesus, His beliefs and doings?

The religious gospel is missing something, more than that, it is missing SOMEONE...Jesus.

The gospel being expressed by many who claim the name of Christ is more committed to validating that their man-made doctrine is right, upholding man-made traditions, and maintain power through manipulation and control than it is about following the person and teachings of Christ such as acceptance, forgiveness, compassionate, helping the poor, merciful, kind, graceful and loving and graces people with the Gospel of Grace that frees them from their obsessive religious debating of doctrine and liberates people to be true followers of Jesus.