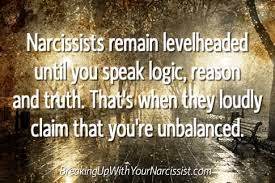 Narcissism is about the allusion of self-righteousness that is delusional. The thinking goes like this, "If I am religious, if I can quote scripture, then I must be good, because people that read the bible are all good and if I am good and I know the word of God, that means that if you disagree with me, then you must be wrong."

Narcissists can be exceedingly charming that is why they make, what people deem to be, good preachers . Their charismatic ability to manipulate and control is perfectly suited to a pulpit abuse  and bent on luring people into deception.


A Narcissist uses his bible misplaced knowledge and his out of context quoting of verses for the selfish reason of proving his beliefs are right.  Although passed of as being used for the purpose of spiritual teaching, it’s used to manipulate and control people into believing that they themselves are spiritually righteous and that we, who are not as capable, not as spiritually in-tuned to hear from God as they are,  and not as deserving do to lack of being seminarian trained,  should follow and trust them because they are the conduit through which spiritual truth  flows through to the "laity".

Where would narcissistic religion be without God...EXTINCT...because they would no longer be able to manipulate, control, abuse and rob people by validating their diabolical practices in the name of God as godly. They would no longer be able to use God as the clincher to seal their man-made doctrines and practices as truth and deceive people, thus, religion would disintegrate, dry up and blow away.

Narcissism is characterized by an inflated sense of self-importance...a craving for spotlight attention from people...an exaggerated sense of spiritual entitlement and a fixation on personal pleasure at all costs...sometime arrogant and lacking empathy...self-centered with a tendency to lord over others. One doesn’t have to look far to see evidence of what reeks with narcissism in the religious world.

On the other hand, I wonder, where would God be without narcissistic religion? Exactly where He is now...in the hearts of His people desiring to move through them as His Community of the Redeemed to affect the Community of Humanity with His everlasting love and His amazing grace.