The Hell of Hell is Hell!

People, what can we to do about all our sinning sin?
Strive to keep the rules of religion so God will not condemn?
And when we fail at keeping the rules and feel the guilt and shame
As religion on us lays, by playing the blame game.
Oh...you didn't read your Bible enough, pay enough tithes or say the "sinners prayer"
And now hell fire stares you in the face, causing you much despair.
In it you will spend year after year, world without end...no wonder the religious gospel causes so much fear.


The gospel of hell-fire is not the Gospel of Grace,
Don't despair from fear that you will go to such a religious place.
Jesus did not teach such a despicable cruel doctrine.
That was devised by man, and is man's concoction.
Don't be trapped in religious deception used to keep you under its control.
God loves you with a love that can never be bought or sold.


God has dealt with the issue, there is nothing for us to do about sin.
So discover God's Ocean of Grace and Love, launch out into the deep and swim there-in.
Instead of being a Hater and a Judg-er, you will be be a Grac-er and a Lover,
Your judging judgement will no longer condemn, because Grace and Love covers sin.
Relax in His Grace and Love because He no longer has an issue with the sin of sin,
Realize that hell does not await you on the other side for you to suffer in 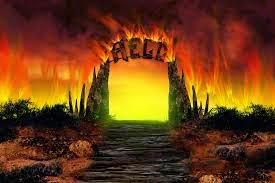 Recognize that on the cross Jesus paid the price for you to be free,
Turn from your haughtiness and selfishness in acknowledgment of what He finished on the tree.
Don't be like the religious people of His day and refuse to accept His Love and Grace
Accept it, and the hell-fire that you imagine will melt right before you face.
You will stop fearing the God who loves you for He has your sins covered,
So break free from all man-made doctrines and deceptions that has you smothered.


Rejoice that Christ the Savior did not come to condemn you in your sin,
He came to destroy the effects of sin in your life and the hell that it causes therein.
That God should love such a sinner as I that He would on a tree die,
To remove the fear of death and the fear of the religious hell-fire lie.
Rejoice in Him that you are not going to that religious place,
And minister to the people you meet the good news of His Wondrous Love and His Amazing Grace.


Jesus did not die so you could manage you sin...He died to DESTROY sin!