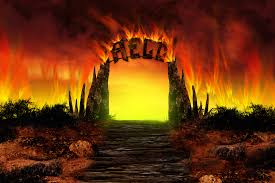 Paul was the Apostle to the Gentiles...He received the the Gospel of Grace from Jesus Himself and the revelation of its mystery for the Church. He was not ashamed of the Gospel of Christ because He declared the "whole council of God. Yet nowhere in his writings did he teach or preach on hell!

Wait a cotton-picken minute..."Paul you never preached on, taught on or even alluded to the great drawing card to get people saved...the great doctrine of HELL in any of your Epistles". Yet you have the audacity to declare that you have declared the "WHOLE COUNCIL OF GOD...come on man get real."

Is it possible Paul understood the Gospel of Christ and we don’t? Could it be that hell is NOT a part of the "whole council of God?

Look at what He says in Acts: “Wherefore I take you to record this day, that I am pure from the blood of all men. For I have not shunned to declare unto you all the counsel of God” (Acts 20:26,27). Yet the religionists say that if we don't preach "hell fire" we will not be free of the blood of all men...Poor delusional Paul!

The plain and simple fact is that Paul was NOT negligent in his teaching ministry. Here is a passage that makes this clear. Paul said that he was “pure from the blood of all men,” because he had declared “the whole counsel of God”...the whole of which DID NOT include a hell fire torture chamber.
Could Paul have never used the word hell and yet declare “all the counsel of God”? Could he have been “pure from the blood of all men” without even once using the word hell? Could it be that hell is NOT a part of the whole council of God?

Have the Community of the Redeemed been duped into accepting a religious tradition that is contrary to the sound Scriptural teachings of the Apostle to the Gentiles?

If we believe the Gospel Jesus gave Paul...which means that Jesus did not give him a hell fire doctrine...would we not also exclude hell from our teaching?

The religious hell teachings concerning hell is not sound doctrine or a part of the Grace message of Christ.

We need not be afraid of where this truth takes us. Truth truly sets us free from religious bondage. And the fear of the religious hierarchy. Jesus said: “And ye shall know the truth, and the truth shall make you free” (John 8:32).

Should we not follow Paul and Christ's Gospel of Grace in which there is no place for, nor need of a religious hell fire torture chamber.