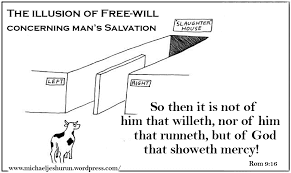 We are under the absolute control of our body functions and our environment.

You get hungry you eat, you need to rid yourself of digested food you go to the washroom, you need money you work, the phone rings you answer it, get cold you put on a coat, get hot you go bare buff, and if you have an itch, you scratch.

The easiest way to check if we have ultimate free-will or not is to try and stop yourself from dying. No one beats death, not even the faith healers, and no one dies because want to die. The fact that everyone dies and in less than a hundred and fifty years tells you with no doubt that we do not have ultimate control.

Ultimate free will is an illusion, a deception created by the brainwashed mind. When we wake up to the truth of our brainwashing it will not take us long realize that we are not in total control. It is easy to believe we have free-will and are in control...after all, we do whatever we want when we want. The truth is, we want to do something because something in our environment gives us a reason to do it, even if it is only in our mind.

In placing the free-will ideology to theology, doctrine and man's interpretation of the Bible before and above mercy and love, religion has actually perverted the definition of freedom. Within religion, freedom has grown to mean my believing is right therefore i will fight to get what I want becaues it is my "God-given-right." The Bible is my compass...I set my course according to what the Bible says to achieve my personal and religious desires believing it is what God desires.

Freedom in Christ is a blessed byproduct of living according to virtues revealed by Jesus as to who Father God is...Freedom is not living the man-inspired values we have created from the man-made interpretations of the Bible as if they are sanctioned and approved by God Himself.

Jesus taught that His truth sets us truly free to follow the path that He traves before us...the path of Mercy, Love, and Grace.  However, religion since before Jesus walked His earthly walk defines freedom as forging one’s own path and willing one’s own destiny and it is done in modern times by the misuse and abuse of the Bible. Religion believes it has the right to write and control people's destiny. People's future state is in great peril if they don't believe the religious Gospel of domination and damnation. Religion believes that people's lives are what they make it, it is their choice to go to hell because they won't believe what they believe to be the Gospel. Believing the Gospel they preach means that absolutely nothing is beyond their reach because God favors them and is on their side.

Such lofty thinking and action remind me of the story about the tower of Babel in Genesis 11, where a people who sought to “make a name” for themselves soon found that pride comes before a fall.

The rhetoric of religious freedom sounds like music to people's ears and makes for inspiring sermons, makes confused believers who think they are free while in the deepest of religious delusion and bondage. People have embraced the illusion of ultimate freedom due to religious and political oppression. People believe that religion...especially when sanctioned by the government...provides a shining future and boundless destiny by a world that fits their selfish will by declaring our independence and choosing our own fate even to choosing heaven or hell to spend eternity. We are the chosen few that Jesus sets free!  But the rest, which is the vast majority of God's created loved people who disagree with the established religious doctrines are in the bondage of Satan and will end up in the fiery flames of a hot eternal burning hell, while the bliss of heaven awaits them as their God-given right!

The stubborn fact is that freedom to governments and religion has come to mean, “I do what I want to do to get what I want to get...according to my beliefs, my conscience, my desires, my convictions, my passions...myself, my way.”

This type of freedom is really about will...my will be done. We talk about freedom, but when the will rules, it actually craves dominance and power. Far from "live and let live," self-will imposes itself other people...whether it’s the most vulnerable in our society or a terrorist hiding in some dug-hole-dungeon.

Ultimately, the very thing we called ‘freedom’ becomes the highest form of bondage because a group of people think they are more important then other people and what they want is more important than what other people want. People believe that the purpose of gospel living is to gratify religious desires that is deemed to be Godly desires.
Free will in most cases is brutish, employing coercion and domination even to the using of lethal force by going to war to acheive the intended result.

This philosophy is a form of brainwashing and is detrimental to the education and well-being of our children as to their outlook on life and their fit into society, or helping people know how to live in peace and harmony with each other. The religious mandate of having to obey their every impulse and gratify their every doctrinal stance is a kind of slavery that strips people of their own identity.

When freedom is the primary focus people end up with a self-centered will that dominates other people with a will that doesn't agree with their will, and eventually everybody becomes captive to "WILLS" own demands.

Thinking we are in control because of our free will is the root of most of societies problems.
It is a devil-mind-busting powerful tool. When Jesus talks about overcoming, is He talking about overcoming this deception because it createsthe illusion that our spirit is separate from the Spirit of God?